From trick plays and foul language, to helping your opponent cross the finish line; sporting competitions can be portrayed as a brutal battlefield or place of common goals in the pursuit of excellence. As an athlete I have had many experiences that have gone in either direction. I have participated in soccer and cross-country, in both events I was small, quick, agile, and a great target for the defenders and other runners to push around. Sportsmanship has a plethora of well-stated definitions in reference to differing contexts in which the sport or activity is played. Feezell speaks of the relation of sportsmanship to virtue and how there are also varying degrees of seriousness to those who participate.  Arnold divides sportsmanship into three categories. In this blog, I would like to touch on the differing views as well as dive into the controversial subject of “Running up the score” where Dixon discusses his views on sportsmanship and its relevancy to “taking it easy” on the opposing team. 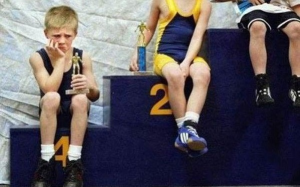 As a young athlete I always heard the saying “be a good sport”, but what exactly does that entail? There is much talk of the parallel of sport to life. Participating in sport may teach a child to work as a team, respect others, over come barriers, and learn to handle defeat and show respect to the defeated in light of a win. All of these attributes will translate well to situations later in life. Before I dive into what constitutes a “good sport” I would like to discuss what it means to be a “bad sport”.

In the video clip it shows a distance runner in the last leg of the race hitting his opponent when he passed him for the win. In his obviously frustrated state, his reaction was uncalled for, which I believe may also reflect his state of consciousness. If he was a “good sport” and had a good moral attitude he would have accepted his defeat and congratulated his opponent for a job well done. But as I will discuss later, the act of congratulating your opponent, in the eyes of Arnold, could be considered Altruistic and not necessary for good sportsmanship. In the next clip Metta World Peace elbows James Harden. Wow. I do not follow basketball, or any other televised sport, but that is not only a blatant disrespect but also complete contradiction of his external portrayal of who he claims to be. These are obvious cases of bad sportsmanship. As discussed earlier, sport is an aid in teaching moral value, though in the eyes of Simon he believes there to be no necessary connection between playing sports and building moral character, it can assist in doing so.  Other forms of bad sportsmanship would include, cheating or the intent to injure an opponent. Although Feezell states,  “but acting in such a way that one might injure an opponent is often morally ambiguous.” There seems to be a thin veil to what may represent “good” or “bad” sportsmanship.

In opposition, the article by Feezell quotes Keating in stating “the interpretations of the essence of sportsmanship have included numerous other virtues: self-control, fair play, truthfulness, courage, endurance, and so forth.” Keating then dives deeper by also implying the dual nature of sportsmanship, sports as a playful activity and sports as a competitive athletic contest.  There is a difference between participating in sports a player versus an athlete, but not to imply that there is no overlay between the two. The game its self has not changed, the rules are the same, expectations of moral behavior are not vastly different, but attitude, preparation, and reason for participation may differ. These divergent views of sportsmanship will help conclude later whether it is of good sportsmanship to “run up the score” of a game or event. I believe good sportsmanship should parallel good virtues, we all have moments where we may react to a situation in sport irrationally in the heat of the moment, and ultimately in the end it is how you handle the situation post reaction. Did you apologize for your crude irrational actions? Help the opponent up after you have just fouled them? Congratulate them for their win?

In Arnold’s article on sportsmanship it was divided into three different views. 1. As a social union, where “playing by the rules promotes a sense of community and amicability.” In this approach one must not only play by the rules but also keep faith in the spirit of the sport by acting in ways not required by the code of conduct but acted out due to your adherence to moral values, traditions of competition, and friendly rivalry. In this form of sportsmanship, it is not whether you win or lose – but how you play the game.  2. As a means to pleasure. Arnold disputes against Keating’s division between “sports” and “athletics”. Whether participating for play or the struggle for victory, “marked by a spirit of dedication, sacrifice, and intensity”, Arnold argues that some of the best examples of this type of sportsmanship arise from pursuit for ” honorable victory”. It is when an athlete acknowledges what is morally and ethically right even if it results in a loss for him/her. 3. As altruism, forms of action and conduct that are done not just because it is fair play but there is a concern for one’s fellow competitors.  In this occasion, an athlete goes out of his or her way to help an opponent, on the same side or not, even if the end result brings, suffering, misery, pain, or a loss; he is going above and beyond moral or ethical obligations. In the end I believe in sports, reason for participation aside, good morals and good ethics should always take forefront. Bad karma is not something I choose to collect.

The last question, is “running up the score” entail good sportsmanship? Dixon believes there is nothing wrong with allowing for a lopsided victory in a competitive game. In our society we have equated a large defeat with humiliation of the losing team. Dixon points out, if the game is played with out the intent to humiliate, and they conduct themselves fairly, there is nothing wrong with winning in such a way. Something could also be said of going “to easy” on the other team. Sportsmanship is a two-way road; you must accept defeat as honorably as you accept victory. Large defeat can also denote level of ability. There is something to be taken from defeat, it can be used as a tool to grow and become a better athlete. I believe that such a victory is acceptable, especially in a competitive athletic situation. I also think that there should be a level of prudent thinking for the starting players and if given the opportunity to rest, that should be done. Even in large defeat, I do not think that it is appropriate to ask the second string players to not play to the best of their ability. Some may only get a few minutes in the game to play, and if that were the case I would not be playing lightly. It would be appropriate to “take it easy” in more light-hearted gaming situations. In the case of teacher/student, if you know that your ability exceeds that of your opponent, and the context of the game is non-serious and non-competitive, then lightening up your game may be appropriate so that you may teach your opponent and allow him/her to grow in their own abilities.

We have all experienced the good and bad of sportsmanship. Good sportsmanship is not only abiding by the rules, but having genuine concern for others, not just for “honorable victory”, and having the ability to put emotions aside and respect the outcome of the game whether you win or lose. In the end, it is just a game. In moments where a teams ability is obscenely out matched, both teams must still play admirably, with only the intention of fair play. Though sport is not the only avenue for educating one of proper moral and ethical values, it can play an integral role of teaching us the ups and downs that occur in sport and life.